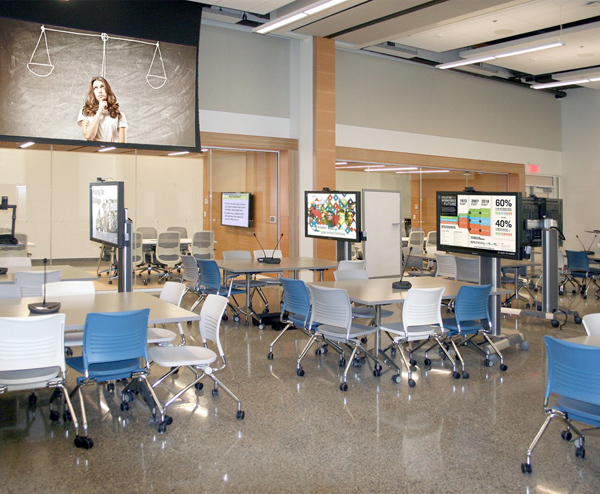 Audiovisual equipment and education have walked hand-in-hand through the decades, going back to the filmstrips, vinyl records, and overhead projectors that characterized mid-20th century classrooms. It’s hard to imagine how instructors could have functioned without AV support over the years, even if most of that hardware never left classroom and laboratory walls.

Now? Concepts of instruction and learning have evolved so much that they would seem unrecognizable to professors and teaching assistants of earlier eras. But so has the concept of “AV,” which has a more prominent position in today’s colleges, universities, and graduate schools. Video in particular has taken on a much greater role in learning, whether delivered to a student’s mobile device, displayed on a large wall in a commons area, or mapped into the floor of an arena.

Today’s students are so accustomed to watching video that it is often a key part of the curricula, supporting (and sometimes supplanting) printed and electronic texts. An argument can be made that it is just as practical to deliver a research paper or thesis via video as it is on paper. Video is also an essential component of distance learning and large group instruction in laboratory settings.

Where video goes, so go large electronic displays. The display marketplace has seen considerable technological and financial turmoil in the past decade, all to the benefit of higher education. Not only have display screens become lighter, brighter, and larger, their pixel resolution has increased. Audio playback has evolved from one or two speakers to virtual, three-dimensional spatial sound. Lower costs to manufacture and finish displays have increased their accessibility and affordability to all markets.

These enhancements reflect changes in the consumer electronics and entertainment world. The elaborate light, sound, and projection shows that characterize a major league basketball or hockey game are being duplicated on campus. Touch screen videowalls at amusement parks that link to smartphones are now appearing in student union buildings. And elaborate projections that create virtual reality in museums can be used for scientific and documentary projects.

In this paper, we’ll look at five different ways that institutions of higher education can put the newest generation of audiovisual technology to work across campuses.

#1 Engage Both Current and Prospective Students 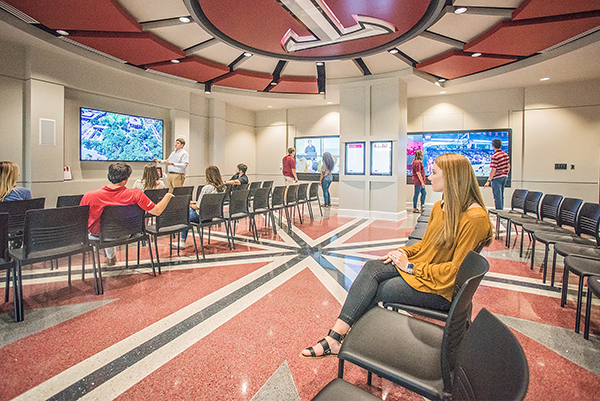 It is becoming common practice to install large video displays at the entrances to common areas, such as student unions and arenas. This form of digital signage is both engaging and informative and a practical way to distribute messages to large groups of students and faculty. In the past, such displays might have consisted of one or two small video monitors mounted on walls often ignored by passers-by.

Today, it would be difficult to miss a large tiled videowall, placed prominently in a lobby or entrance hallway. The availability of large, bright high-resolution flat screens with thin mullions (edges) has made it practical to create some very clever and eye-catching installations. With image tiling software and scheduling software, it’s a simple matter to combine text, photos, and video across the screen to deliver scheduling updates, promote an upcoming event with a catchy video montage, and update students and faculty with emergency weather and safety alerts.

Videowalls can also help with recruitment. Troy University (Troy, AL) renovated and expanded its Adams Administration Building, creating a new welcome center for families and prospective students visiting the campus. The goal was to show 21st-century learners that Troy was indeed current with the latest in technology and to build credibility by employing the tools that student recruits most relate to. Accordingly, the university installed a Clarity Matrix MultiTouch LCD videowall in a 6x2 screen configuration, adding an interactive, digital solution to captivate visitors.

This videowall is used to display event information and promotional content about the university and can also split into three interactive screens if any one of three zones are touched. Visitors can then choose from a menu of options and explore content about the university, including video segments that present Troy University’s history, athletics, academic programs, student life, and more. Users can also select a mode that allows them to take a “selfie” photo with a Troythemed backdrop on the videowall and tag their pictures on Twitter, Instagram, and other social media platforms. 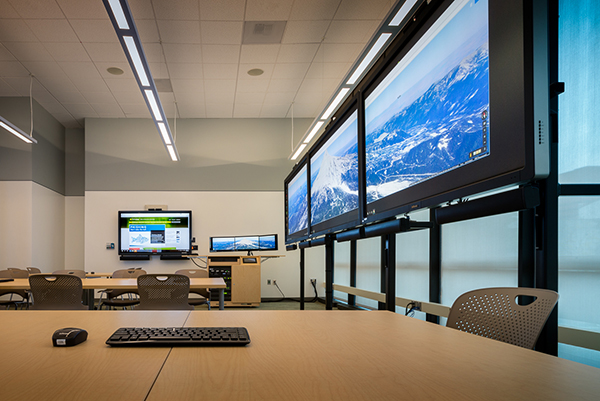 The concept of interactive learning isn’t new, but a potent combination of intelligent AV hardware, fast Wi-Fi, and mobile devices has reshaped our thinking about classrooms. Instead of one-way instruction with some feedback from students, a class can now support photos and videos from everyone, delivered simply and efficiently from a host of connected mobile devices in a collaborative environment.

The traditional classroom has given way to a multitude of variations, not the least of which is the “huddle space.” This learning area might consist of nothing more than a few chairs, a table, and a large display. Participants in the session share documents, images, and video simply by “casting” them to the group display over a secure wireless link. Content formerly stored locally can be archived and retrieved from cloud servers, obviating the need for printed texts and supporting materials.

Large displays can also work in groups for interactive sessions. Portland State University (PSU) in Portland, OR, created a meeting and collaboration space for local government and private companies to work alongside PSU researchers on a variety of projects that link data sets, visualization, and decisions. Their goal was to accelerate research and learning in areas such as forest fire prediction and prevention where largescale data visualization permits people to see patterns they otherwise could not predict or determine.

The finished “Decision Theater” room, modeled after similar facilities at Arizona State University and The University of Chicago, uses 80-inch and 70-inch InFocus Mondopad interactive displays to provide both a large-scale, 360-degree view of data and images and allows participants to work in pods or groups on a single unit of study and then pair all groups together to view content on a larger 1x3 videowall screen. 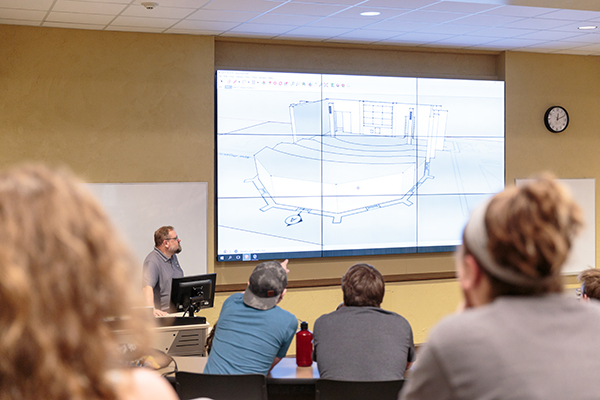 For the vast majority of classrooms, the most common approach to large-screen imaging was to either hang a projector in the classroom or lab, using offset images to illuminate a large screen (often requiring the dimming of lights), or to build a rear-projection system behind the wall. While the latter was easier on the instructor’s eyes, the rearprojection system required a great deal of horsepower to provide bright images, generated a considerable amount of fan noise, and required supplemental cooling and dust management.

The introduction of ultra-short-throw projection systems eased some of these restrictions, but the projectors still required lamp changes. Additionally, ambient light spill on the screen reduced contrast and visibility. To achieve larger screen sizes suitable for big lecture halls, two or more projectors were often installed in a seamless, blended image configuration. This approach could be costly and required careful matching of brightness and color across all screens.

The University of Idaho (Moscow, ID) decided to take a different tack when upgrading an older auditorium. Its Life Sciences 277 lecture hall holds 120 students and is used primarily for critical biology, engineering, and science classes where class materials often include highly detailed and colorful images of cells, organisms, CAD drawing, diagrams, and charts. The university had received complaints from professors who requested not to teach in that room due to the existing projector’s bright light, which often shone directly in their eyes. Changing to a rear projector would have required the removal of a large number of seats in the room.

The solution was to install nine 55-inch LG LV75A thin-bezel LCD displays to create an 11-by-6-foot videowall with a 3x3 screen configuration, one that could be controlled and managed entirely through the lectern. The individual tiles have thin bezels that create a largely seamless image, one that has in excess of 4K pixel resolution. Rated at 500 nits brightness, it holds up well under normal room lighting and eliminates any visibility or glare problems for instructors. The University Classroom Strategic Planning Committee also wanted to ensure the new displays possessed a modern and inviting aesthetic to complement the room’s recently re-tiered, collaborative layout and often showcases Life Sciences South 277 to prospective students on campus tours.

#4 Use Powerful Imaging Tools to Model Class Studies and Experiments 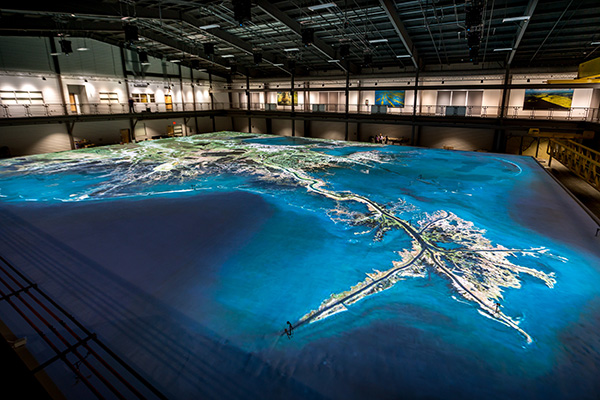 We hear a lot these days about virtual reality and augmented reality, terms that conjure up visions of people stumbling about with oversized headsets and goggles, waving at indeterminate objects in the air. But there’s more to VR and AR than goggles. In fact, virtual spaces can be created with imaging technologies that require no special eyewear.

The trick is to employ a technology called projection mapping. Special software in projectors (which are increasingly using eco-friendly lamp-free technology, by the way) allows the projected image to conform to just about any surface — concave, convex, trapezoidal, and even circular. With mapping, instructors and students can create more immersive learning experiences and presentations by showing images on any surface conceivable — even water, ice, and fog.

A very clever use of projection mapping has been implemented at the Louisiana State University (LSU, Baton Rouge, LA). Working in partnership, the Louisiana Coastal Protection and Restoration Authority (CPRA) and LSU’s Center for River Studies designed and created a 90-by-120-foot movable physical model of the Mississippi River, mapped by 20 Christie J-Series projectors to represent a 190-mile, (14,000 square mile) stretch of the river and educate people to a looming ecological and economic disaster. The CPRA plans to open strategic locations along the levees to divert water and sediment from the Mississippi River back into the surrounding basins to rebuild and sustain the wetlands that have been lost.

While CPRA had already done a lot of computer modeling of these projects, they wanted to look at it from a physical model perspective to complement and validate what the computer models had predicted. Since the ribbon-cutting ceremony earlier this year, CPRA and LSU have demonstrated the model to more than 500 students from around the state, attracting the attention of the Secretary of the Interior and officials from the Environmental Protection Agency as well. 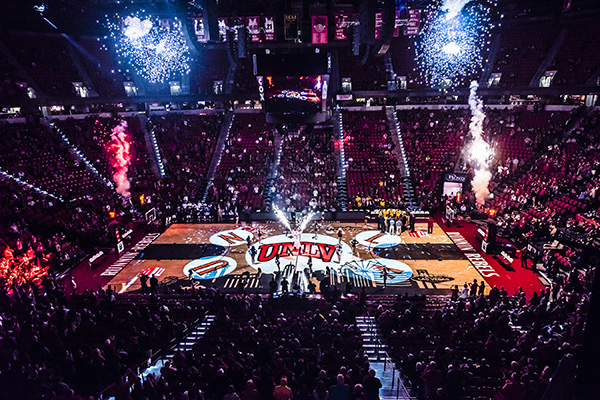 Just as AV has come a long way in the last six decades, so have intercollegiate athletics. Fans have been conditioned to expect a higher level of entertainment comparable to what they experience with professional sports – and of course, that means lots of video and bright, colorful graphics before the game and at halftime.

To light up the basketball court inside an arena requires overcoming a two-part challenge – very long projection throw distances and high ambient light levels. What’s more, any projectors used for this application must be able to operate in any horizontal and vertical position, even if rotating while projecting. To do so, a new generation of projectors must be used, one that eschews lamps in favor of instant-on, instant-off solid state illumination systems based on laser phosphor technology. And it goes without saying that projector maintenance must be kept to a minimum due to accessibility and labor costs.

The eight laser projectors are installed above the court and programmed to converge together, displaying one large mapped image over the entire court. Utilizing a pixel-mapping technique for accurate tracing of all lines of the court and masking for pinpoint accuracy, the UNLV pregame show includes 3D modeling, motion graphics, video and text overlays. Given the projection space and area, it would have been impossible to create these effects with any other type of display — LED displays are certainly bright enough but can only be mounted above the court and around the perimeter. The projection experience is exceptional and casts UNLV in a unique…light.