About 600 feet from the Rumsey Playfield in Manhattan’s Central Park are Fifth Avenue condos selling for north of $28 million. Their inhabitants probably like music, but not when it’s rattling their Honduran mahogany-trimmed windows on a Saturday night. Therefore, it was imperative that sound from concerts in the park, such as SummerStage, the outdoor music and arts festival held June through August and this season featuring George Clinton & Parliament Funkadelic, Kurt Vile & the Violators, and the B52s, be confined to the seats.

SummerStage’s 33rd season represents an inflection point for the popular (and mostly free) festival: The main venue recently underwent a $5.5 million renovation, with a new stage, VIP balcony, canopy, LED screens, and PA system. But it’s still within sonic-firing range of some of the costliest real estate in the world. So, in addition to upgrading the sonic quality, this year's festival was also an opportunity to apply new technology developed and propelled by the growing number of urban music festivals. Cities like Boston, Miami (where the Ultra festival’s EDM thump is accused of inducing anxiety in local marine life), and Austin, Texas — dubbed the “Live Music Capital of the World” —  have all been struggling to find a regulatory balance between the music volume and those who live within its reach.

Not About Power, but About Pattern Control

“There has always been a rather strict noise limit on the music here, around 95 dBA, because you have very sensitive neighbors,” says Drew Levy, Education and Applications Support Technician for d&b audiotechnik, whose KSL system won a competition to be SummerStage's new installed PA system. “In environments like Manhattan, it’s not about power, but about pattern control — the ability to keep the sound on the seats.”

Adds Jon Hilz, the system technician and monitor mixer at SummerStage, “People calling with noise complaints about concerts in parks don’t want to hear a nuanced, scientific explanation of noise calculations,” he says. “They just want the noise to stop.”

Before the first note played this year, d&b technicians joined acoustical consulting firm Acoustic Distinctions in a process that is increasingly playing out ahead of downtown music events across the country. The sound system was designed virtually, inside d&b’s ArrayCalc simulation software. The CAD-style, 2-D application calculates the predicted frequency response of a draft system design, from which designers can then refine the system’s components. Once a system design was established in ArrayCalc, it was combined with data from NoizCalc, another d&b simulation platform used to predict the behavior of sound in specific environments. The program takes in data from other sources, including Google Maps and  OpenStreetMap, which provide cartography and satellite photography, from which parameters such as the height of buildings facing the park can be derived. To that were added temporal data, such as wind velocity and direction, temperature gradients, and topographical features like foliage, hills, and walls. The calculations relied on key international standards (ISO 9613-2 and Nord2000) used to predict sound propagation, as well as software developed by German acoustical engineering company SoundPLAN. 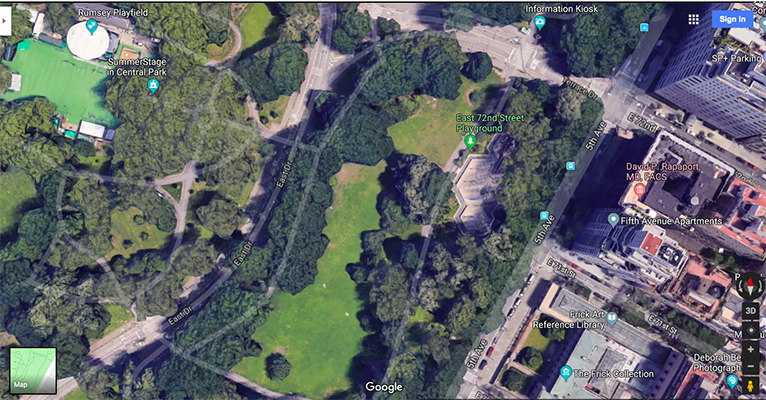 The combined output of all this analysis was a three-dimensional, interactive noise-grid map of the entire area that could gauge potential for sounds issues, such as the reflectivity of buildings facing the park, how foliage might act as an absorptive element, or how fencing and structures could diffuse sound waves. The results were displayed graphically, showing the predicted noise levels from the stage into the surrounding areas beyond the venue. The team could then apply its findings to the PA system.

The final system design, incorporating acoustical and predicted noise measurements, dropped the sound-pressure level by 30 dB by the time it reached Fifth Avenue, to a level roughly equivalent to loud conversation. Using the refined design, the new sound system — supplied by integrator Sound Associates, which is known for its work in Broadway theaters — was installed by the park’s own staff. However, SummerStage’s audio technicians decided to try a variation on the software’s recommendation for subwoofer deployment. Seeking to maximize impact for the season’s dance and hip-hop artists, d&b J Series subs were temporarily arrayed in a monoblock-amplifier configuration under the stage. Measurements, however, showed too much of an increase in low-frequency energy (LFE). “There’s always an element of trial and error to this,” says Hilz.

Overall, the noise prediction and mitigation efforts ahead of SummerStage’s season have been deemed successful. “We have not received any complaints from our neighbors regarding sound,” says Heather Lubov, Executive Director of the City Parks Foundation, which runs SummerStage, That said, Lubov is quick to point out that sound quality was the main impetus behind the upgrade, and explains that in the past, not all noise complaints aimed at the park were necessarily attributable to SummerStage.

“Software is just a starting point,” says Roger Gans, a consultant working with Acoustic Distinctions on the SummerStage project. He notes that acoustical measurements taken in an endemically noisy environment — like a city park — can skew results. Thus, re-measuring after remediation is important.

In addition, the effect of sound on people — especially music — can be highly subjective; some may find even a small amount of LFE intolerable while others are annoyed at midrange sounds. “It’s very difficult to separate empirical findings from perceptual ones,” Gans says. “Especially if you also have traffic noise and dogs barking.” But these days, he adds, modern line-array sound systems combined with advanced prediction software and experienced technicians can address noise issues far more effectively than in the past. “It’s a starting point, but a very necessary starting point,” he says.

More and more, event producers and sound-system vendors are getting ahead of noise problems rather than chase solutions after complaints file in, as was the case at venues like Red Rocks in recent years. As noise becomes more of a factor in architectural and urban design, and as music and event production become more bombastic, the options for predicting how sound will behave in various environments are proliferating. Such solutions include noise3D, which also takes into account traffic noise for architects and urban planners, and CadnaA, which has versions for measuring both indoor and outdoor sonic characteristics. Keeping sound where it needs to be is more important than ever — predicting where it will be is now a requirement for all event planning.

M-Noise: A Test Signal and Method for Measuring Loudspeaker Performance for Music with Merlijn van Veen