What I’ve Learned From 30 Days of Videoconferencing 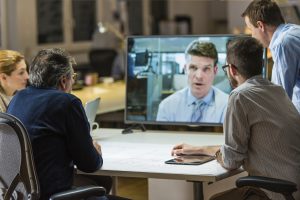 At my new workplace things are different. We use videoconferencing for pretty much every meeting. It’s on our desktops, in our huddle rooms, and dialing into a conference without video is like walking into an important meeting with half your clothes on — more on that later!

So what’s been my experience? Here are six observations.

1. I’ve developed strong bonds with colleagues in a short amount of time
There’s something more intimate about seeing people vs. just talking to a speakerphone. Many of my colleagues work from home or conduct evening/early morning meetings from home to accommodate time zones. I’ve met several wives, husbands, kids and pets dropping in and out of frames. Rather than being awkward moments, my colleagues have taken the time to introduce their significant others before getting back to the business at hand. I’ve also seen their book collections, CD collections (yes, a few people still have them) and kids’ sporting trophies. In under a month, we’re already sharing jokes and having conversations about the important people and things in their lives. I can’t imagine getting to that level of bonding using audio conferences, even if you were communicating for years.

2. I’m more engaged at meetings
I feel rude if I check my phone in a videoconference the same way I’d feel rude if we were meeting face-to-face. Of course if something urgent comes up, it’s ok to go on mute or switch the picture off for a moment. But generally the etiquette of the offline world applies in the videoconferencing world. This makes meetings more engaging and more often than not, shorter.

3. I can “read the room” better
Say goodbye to awkward phone silences. With videoconferencing, you can read the body language of the room and adjust your speaking points accordingly.

4. It levels the playing field between introverts and extroverts
On conference calls, extroverts tend to dominate as they have the loudest voices. With videoconferencing, I can observe the quieter folks whose body language tells me they have studied the situation and probably have something interesting to say. I’ll wait for a pause and then invite their opinion pro-actively. I’ve tried this tactic several times now and have never been disappointed with the results. I’ve either learned something I didn’t previously know or arrived at a decision with more diversity of thought.

5. It levels the playing field between HQ and regions
I’ve worked for some big global companies, both in the regions and HQ, and there’s always real and perceived divides between the two sides. Well, guess what? Videoconferencing brings those sides together. Both sides are equal. Everyone is a participant — not a voyeur. I can travel to Singapore, Mexico City, London and Sao Paolo in the same day. The result is no jet lag, more bonding with far away colleagues and most importantly, my team can make more informed decisions.

6. You get what you pay for
When it comes to work, bad video is worse than no video. Think about it for a moment… On any given day at a work meeting you’re sifting through data points, weighing arguments and information, and ultimately making critical business decisions. The annoyances of flicker, out-of-synch audio, background noise, bad lighting, etc. can be more than just annoying: they have an impact on productivity. I love FaceTime to keep in touch with family in Australia but at work my team uses a Polycom RealPresence Centro. We communicate in a circle, the camera “automagically” finds the active speaker and background noise is miraculously removed. It doesn’t matter if the other speaker is on the other side of world, they look and sound like they are right next to you.

So as they say, once you start video conferencing, you can’t go back. Well, there is perhaps one downside….

I ride my bicycle to work and keep a change of clothes at the company gym. Well, one morning this week I arrived at work to realize my stash of clothes was empty. What’s worse, I had an 8 a.m. meeting. And even worse than that, it was the marketing team’s global all-hands meeting. I decided to bite the bullet and enter the videoconference room with my shorts on. While the crowd in the room wasn’t huge, when I made a comment, my biking attire was broadcast live in HD to 36 countries and my IM has been running hot all week with “shorts” jokes.

Despite this small set back, I’d never go back. Videoconferencing is here to stay. If you’ve tried it before, try it again with the latest pro gear. The technology has come a long way and is more life-like than ever. The future of work is already here.

This blog article was originally published here and is used with permission.