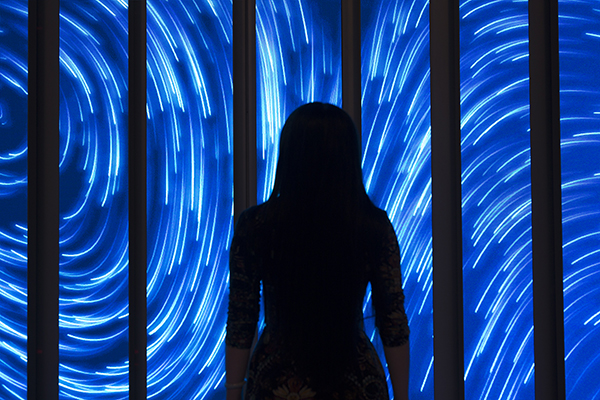 To be memorable now, to really cut through the din of auditory and visual noise and lift people’s gazes from the endlessly attractive glow of mobile devices, an ancient principle must be applied: Humans love art.

This pertains not just to the carefully conscripted fine art contained in galleries, but to a more universal expression of aesthetics that even applies to what some might consider the opposite of art, the concept of advertising, and beyond, to that giant, nebulous notion of “branding.”

Even the biggest video display in Times Square won’t leave an impression if the image fails to spark that little bit of glee that humans experience when they see something beautiful or evocative or remarkable. Or, even better in today’s social economy, something sharable.

Suddenly, it’s super hip to commission true art work, and to elevate the endeavor by collaborating with local creatives and reaching out to engage communities in expansive dialogues. If that scenario of visual art plus intellectual and social gatherings sounds familiar, it’s because humanity has engaged in creative discourse like this throughout history. Major benefactors commission art work for public display and provide a connection point for society. Then in turn, they gain a place in memory.

“Essentially we have 21st-century art sponsors that understand the connections between brand and people — I feel like we're going through a renaissance,” observes Jason White, the Co-Founder and Chief Creative Officer of Leviathan, a specialized creative agency that translates brands’ requests to “make something cool” into truly aesthetically engaging experiences.

Leviathan has built a substantial practice in creating works of art that tell a brand’s story in an evocative and subtle way. The Chicago-based studio specializes in delivering captivating architecturally integrated audiovisual works that build a brand’s reputation without shouting names and emblazoning logos everywhere.

Looking at general advertising trends, White points to several notions that are informing these purely creative endeavors. First, sincerity and authenticity are chief among the attractive elements that draw people to believe in a brand. Some would say that’s a generational thing, but plenty of humans are seeking something real now.

And then further, when a brand is seeking to create a site-specific, sculptural, destination-making piece of content, often in a corporate lobby or in an experiential pop-up, that shifts the plan away from traditional advertising. “Advertisements outside of the brand space are way more effective,” White explains. “When you're in the belly of the brand, you're already encased by it physically, so you're looking for a deeper connection to the brand.”

These additions to the built environment need a name, so maybe we’ll define the concept as “brandless branding,” or the creation of sensory spectacles that omit any overt reference to the entity seeking to bolster its place in the mind of potential customers. The artistic offering, often presented in a public space for enjoyment of humanity at large, is perceived as an authentic expression of connection between corporate commissioner and consumer. So instead of a commercial, they get cred.

White elaborates, “Brands desire to be brandless because they  want to turn visitors on to something different. And they have a desire to stand out from the pack.” Which is why Leviathan frequently is called upon by brands “to help them express themselves in completely new ways.”

How does brandless branding work? Well, it could be as subtle as using the color of a logo in a new way. Or more often, with tech-centric brands and the rest of the world so fascinated by new media at the moment, it’s a quest for use of technology in an entirely new way. In the latter case, White says, “They call us and ask us to play with technology on their behalf to experiment, just to show the public what's possible.” 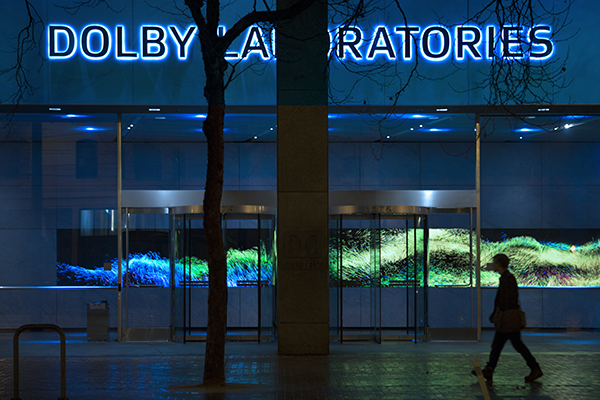 The ask can be an invigorating one for White and the team at Leviathan, particularly because as experts in both creative content development and the audiovisual and multi-sensory technological delivery methods for their material, they are often entrusted with vast amounts of creative control. “The cool thing about most of the projects that we do is that it's actually a collaborative vision helping our clients communicate through our art and technology,” White says. “We're helping them communicate their message, or their  vision, of what art means. And I know it's a really heady thing to say, but that's actually what they're after. A lot of these clients are looking to get into the art world.”

Or in some cases, they’re already very much embedded in the art world and are looking to emphasize that aspect of their brand to the public. Near the top of this list would be Dolby Laboratories, which worked with Leviathan to outfit its San Francisco headquarters with an ever-evolving art work that demonstrates the creative power and artistic connection provided by its technologies. 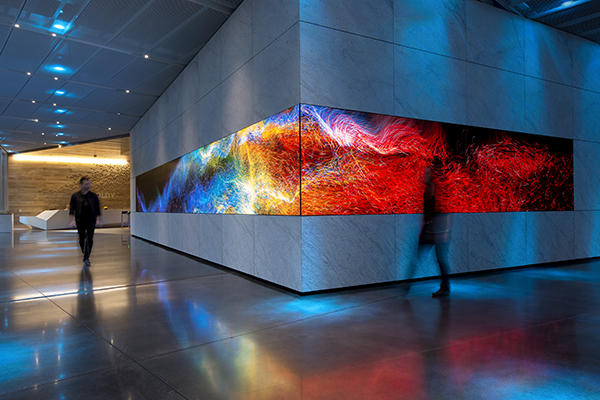 The result is “Metamorphosis,” a piece that Leviathan developed to take full advantage of sound and video capabilities provided in the Dolby Gallery. The rather enticing setup includes a 62’long LED screen that wraps snugly around a 90-degree corner, and a full Dolby Atmos setup encompassing 52 loudspeakers and 34 subwoofers.

To combine Dolby sound and vision, Leviathan developed a generative creative work that directly references the history of fine art. Pulling from a palette of color data from painted masterpieces from the past, Metamorphosis creates a swirl of visuals that also “play” the audio by assigning different tones to different colors. Undulating from Leviathan’s experiments with Dolby technology, “Metamorphosis” is a branded story, White explains, “but nowhere in there do you see Dolby branding.”

When the technology isn’t a guiding factor, the architectural space is often the starting point for brandless branding explorations. “It’s also about how artists are using a specific architect’s vision and space to tell stories within their parameters of fine interior design,” White notes. “Everything that comes to us has some sort of parameter around it, because it all has to fit within this space.” 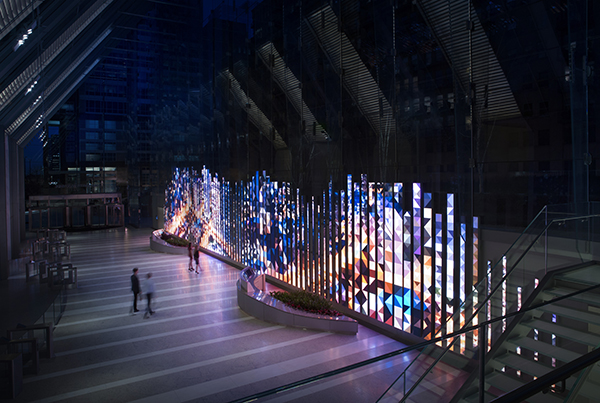 Architectural and interior design were very much the guiding factors for “150 Media Stream”, a commission that Leviathan took on for the developers of a new 54-story commercial tower at 150 North Riverside in Chicago. The initial goal was to create something spectacular that would set the property apart and provide a canvas for public works of art, White reports. “And they had steadfast rules that there would be no branding, no logos, nothing like that, because they wanted to keep it very elevated.”

The result is the largest video wall in the city. But it’s not just big, it’s architecturally magnificent, and the video works displayed on its 3,000-sq.-ft. canvas are true works of art contributed from Leviathan and various artists from around the metropolis and the world beyond.

Comprising 89 variously sized vertical LED displays and the negative space between them, “150 Media Stream” displays an evolving selection of permanent, rotating and generative art works. The Leviathan-designed content library provides curators with much aesthetic flexibility. But the generative piece is even more automatic. 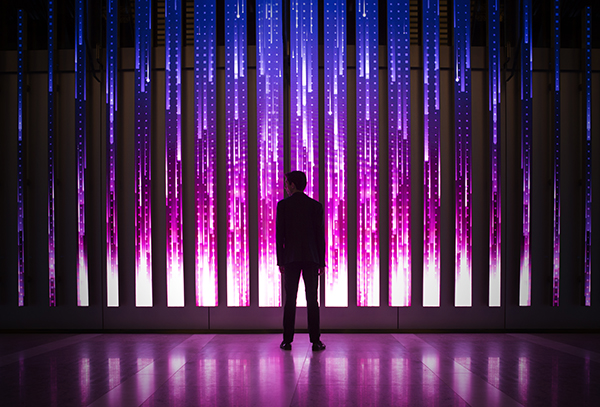 With a goal of providing enough content to fill an entire week without repeating any piece of content twice, Leviathan set about creating a “a living, breathing sculpture that reacts to the environment around it,” White describes. To achieve this, Leviathan developed generative algorithms that address seasonal, monthly, weekly, daily and even real-time considerations.

“You can build systems that adapt to reality, that adapt to all human conditions, and react to the environment in real-time,” White says. “The whole concept is how do you reflect the mood of the day in a way that feels as if the architecture is actually mimicking the natural world. So it's not a one-way thing. It's completely interactive with the environment, and it basically goes on forever. It has a life of its own.”

To complete the immersive effect, the “150 Media Stream” content evolves with the time of day. In the morning, coffee-carrying office workers will experience content that matches that early energy, while at night the vibe will be more sedate. “It’s important to think about the totality of the surroundings, the totality of the world that digital is living in,” White emphasizes. “And this to me feels like a new frontier, because these  systems can now adapt to time, temperature, weather.” 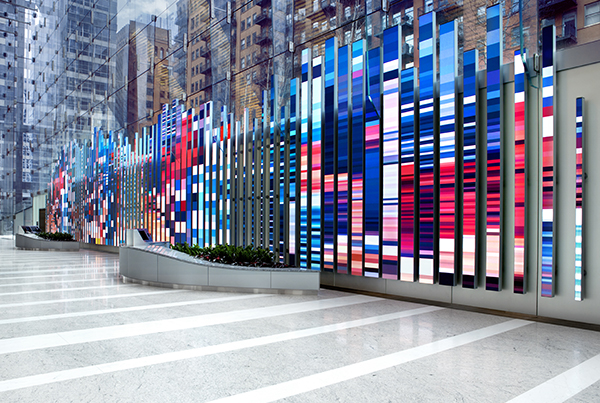 This living, breathing brand story has become an attraction in Chicago, and the reactions among building occupants and visitors who show up for open gallery hours are a branding dream. “People feel inspired, people feel engaged, they feel enlightened,” White says. “They feel like sharing this out with the rest of the world, and the mileage that gives these messages is beyond anything. People don't tend to share commercials out. So these are highly shareable by design.”

What’s ahead for brandless branding is the inclusion of more senses, including scent and touch. Leviathan is consulting on custom aromas and also haptic feedback that will enervate a brand space. “Our clients tend to focus just on visual stimulation, but we  try to focus on the whole  4D experience,” White emphasizes. “It can be absolutely immersive.”

Ultimately, brandless branding is about creating an elevated experience, and that requires thoughtful use of technology. Expect more of this adaptive and creative storytelling ahead. “The days of flashing video for video’s sake, just to show off technology, I think that those days are coming to a close and everyone's looking for a higher-tier experience,” White observes. “Those were overt branded messages. But when you start to get into subtle branded messages, a brand that's trying to talk to you about the world in some way, that's when it gets really interesting.”