How Workplace Design is Evolving to Include AR and VR

If the office has been feeling different lately, it’s because there are now several new dimensions of reality in the workplace. Augmented Reality and Mixed Reality, with their blend of real vision and a layer of text and visual information via a mobile device or headset, are helping designers size up rooms, troubleshoot technology and receive information and instructions on-screen before making moves in real life. And for applications where complete immersion is possible, Virtual Reality is already in use as a design and training tool for many in the audiovisual experience design world.

As AR, MR and VR become more present in the way we work, there will be many opportunities to connect these technologies with enterprise clients’ needs. Here are four ways that your workplace AV designs may already be changing with these new ways of seeing, communicating and collaborating. 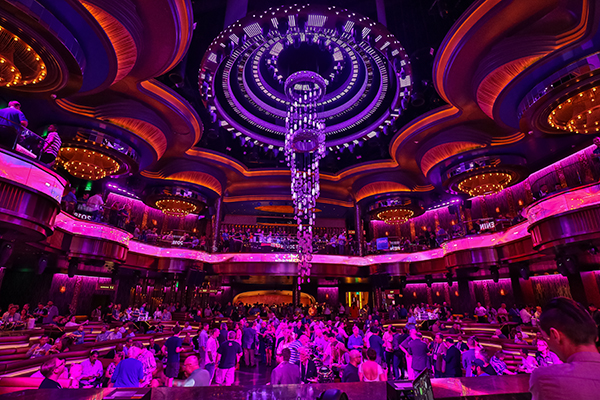 Presently, the audiovisual experience design world’s most prevalent use of AR and VR is as a design tool. And rightly so. Experience design projects now include many ephemeral and complex visual concepts that would require a lot of capital and real estate to prototype. Further, as more designs take on kinetic elements and multi-sensory features, an AR or VR pre-visualization can help simulate the physical effect of a project while it’s still in the design phase. Then the client and designer, having felt something very like the real sensory experience the environment will produce, can make better design decisions to create the best result.

Such was the process for TAIT Towers as it designed the room-altering kinetic chandelier show-stopper for the Omnia nightclub at Caesars Palace in Las Vegas. In a 2018 InfoComm Center Stage talk about the realization of that project, TAIT Director of Business Development - Kinetic Architecture, Tyler Kicera, and his co-presenter Dave Gare, Senior Associate and Executive Producer with The Lab at Rockwell Group, shared some details of how VR visualizations aided in their collaborative design process on that project.

In early renderings, Kicera said, the chandelier was comprised of many more rings than were actually built, producing something like 150 axes of motion. Evidently the VR demos were so realistic that the full power of that magnificent beast of a kinetic light sculpture was palpable. Having experienced the full brunt of the potential for a massive, shape-shifting design element, the team learned that it could pare down the design to approximately 30 axes of motion and still create one of the most photographed entertainment features in the world.

Even in less motion-centric design projects, AR and VR visualization speeds up the iterative selection of materials and locations of room features and furniture. “We’re at a point where it’s no longer good enough for us to think we can design on paper,” emphasized David Kepron, Vice President, Global Design Strategies, Distinctive Premium Brands with Marriott International, in another VR-related dialogue at Center Stage 2018. The days of walking into a design meeting with a list of materials and a video display that isn’t calibrated to represent the true color and feel of a concept are numbered, he said. “You need to be able to convey the feeling of the experience a room design.”

Kepron described how Marriott uses a combination of AR and VR tools and photogrammetry for scanning environments and turns them into a rendering for the entire team to experience in its collaborative Igloo 360-degree projection viewing room. Meeting together in this virtual space speeds up the post-design validation phase of a project, Kepron noted. “If you can put the entire design team in those environments, then we can much more clearly understand what it's going to look like. You can understand the space with your body, not just your eyes.”

Meetings began the path to virtualization long ago, with videoconferencing and web-enabled video and collaborations augmenting real-life interaction. So, it makes sense that AR and VR capabilities are now furthering an enhanced sense of connection.

There are a multitude of ways that meeting participation is already changing with these new tools. The use of AR in videoconferencing allows users to share and manipulate 3D virtual holograms in real-time with technologies from companies like Meta, improving remote product demos, product design and other collaborative tasks. The possibilities for VR in meetings still leave much to be determined, however, according to a user survey conducted by Zoom.

Based partly on this research, Zoom Founder and CEO Eric Yuan wrote a piece of commentary for Forbes where he shared his perspective: “Though its current uses in video meetings are more limited than that of AI, AR has the promise to truly redefine and enhance communications in many industries — and it's getting off to a great start.”

Meanwhile, Yuan was not as optimistic about the use of VR in meetings, as the latter tends to replace the human face with avatars or holograms. However, there are some companies tackling that issue already. Mimesys provides “holographic capture” technology that beams meeting participants’ personal 3D renderings into VR or AR meetings.

It won’t be long before audiovisual experience designers will be accommodating for these new meeting styles, according to Neil Redding, Director of Emerging Technology with ThoughtWorks. “We’re almost there, at the point where we have an augmented roundtable,” he said. “We’ll be able to sit in meeting room, and some people are there physically and some are holographically represented. It’s starting to become really relevant to people who’s job it is to facilitate meetings. Within ten years, or maybe even five years, it will start to be common to have that kind of mixed reality meeting experience.”

Something to note in designs for these spaces, meeting rooms themselves are likely to also become augmented. In that category, Lightform was creating a lot of buzz at InfoComm 2018 with its full-room projection mapping. This technology isn’t just for creating decorative elements or immersive designs. Rather, Lightform calls it “the ubiquitous user interface.” The aim, according to an article in Wired, is to “make projected light so functional and ubiquitous that it replaces screens as we know them in daily life.”

AR for Remote Collaboration and Training

For the task of collaboration both in and out of meetings, AR and VR provide additional connectivity for productive outcomes. As teams grow increasingly scattered, either across various offices or simply amongst those who work remotely, workplaces are adding new rooms that allow for shared viewing of projects and products. Digging into an engineering problem via videoconference is one thing but adding an AR headset to give remote participants a direct view of what a team member is seeing is quite an upgrade to the experience.

The use cases are just beginning to emerge, which means now might be the time to add some understanding of AR capabilities and practices to an AV practice, or build a collaborative network with AR developers. “AR is going to be everywhere very soon and figuring out how to use it in different people’s businesses is really critical,” observed Cortney Harding, Founder of Friends with Holograms . “A lot of people are sitting on it, thinking it’s got potential, but this is going to happen, and it’s time get on it. The worst thing you can do is start scrambling when it does happen.”

These conversations may already be happening, as many enterprise clients will already have adopted AR and VR in their own business practices, especially in areas related to training. VR provides a safe simulation to many types of dangerous or mission-critical work. Team members can be fully immersed in a range of scenarios, helping them to prepare for client-facing field work, dangerous repair or rescue missions, or even in the case of Walmart, immersive training for Black Friday operations.

The immersive aspect of VR training adds unique requirements to workplace design. Participants wearing headsets will lose the ability to see and/or hear their real surroundings, and in the case of VR setups requiring tethered headsets, extra precautions will be required as they move blindly around a thick cable connecting them to the device.

This adds another area of potential opportunity for those working with enterprises to set up training centers. “Not a lot of people know how to set the six degrees of freedom headsets,” Harding noted, “so learning how to set those up is always a good addition to your skill set.”

Beyond that, being able to provide professional technological facility design would be a plus. Too frequently, a VR setup is relegated to a random corner of a facility somewhere, and without proper space design, participants can collide with furniture as they move through virtual space. “knowing how to set up a space so people can do VR — actually knowing how to set up a really good room — is really valuable.”

Algorithmic Assistance to the Worker

Already, mobile-based AR is being used to enhance manufacturing, shipping and mechanical processes. Eventually, when AR headsets become more affordable and widely distributed, team members will have instant heads-up visual access to reams of information that will improve the effectiveness of their tasks.

Here is where AR meets AI and big data in the workplace. AI can process the multitude of data collected from sensors on any number of objects in a work environment, and provide real-time problem-solving analysis through AR. So, if an airplane mechanic is checking an engine that endured excessive turbulence on its most recent flight, that information could be provided in addition to repair history and schematics. Advisories on such case-by-case precautions could be delivered to diagnose problems and enhance each maintenance task.

“AI and machine learning can take big data sets and really create a lot of utility in terms of pattern recognition,” Redding said. This is useful both in training applications and in what he termed, “algorithmic assistance to the worker.” The latter concept can be applied not only to mechanical, hands-on tasks, but also enterprise and customer-facing operations, providing details and context to help solve problems in real-time.

This AI+AR mix could have immediate effects in the AV piece of the enterprise world as well. Data from conference rooms can help eliminate confusion about which rooms are actually in use, or make recommendations for a meeting room of the right size and containing the right communications equipment for the items on the agenda.

Ultimately, the most rapid adoption of these tools will occur in applications where the burden of processing massive amounts of data and information can be handled by a machine in real-time. With these applications, we’re moving past the era of big data, and figuring out how to analyze and store all of that information, and into real use, Redding said: “We’re now in this period where savvy enterprises are asking how they can use machine learning to organize all this data and make use of it in real time, as opposed to warehouses running batch reports every night. We’re making use of data as soon as it’s produced.”

That type of real-time, responsive integration will seem familiar to AV experience designers. Looking ahead, as AI, AR and VR become more integral to workplace design, these tools will become another channel in systems design. Now is the time to expand the visioning process and imagine what new connections will be made possible when we can see beyond the surface and into the data and information of things.

The Value of Certifications and Education | AVIXA Intel